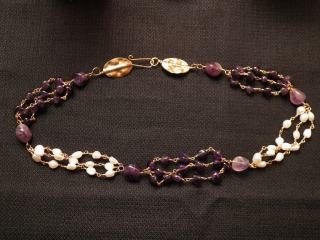 The saga of the Gallo-Roman necklace is over!  I have to finish writing my documentation for it, but the piece is complete.  On a whim, I went to one of my local bead stores (Beadazzler Beads in downtown Overland Park, Kansas), and looking over their selection of Hill Tribes metal, I saw these rather oval-shaped beads.  Sure, they’re not exactly what I was looking for, but to capture the essence and the feel of the original piece, they’re perfect.  These beads are made of brass, not gold or silver, due to the current prices of precious metals.  (Gold is currently, as of this writing, at $1576, which is down from the high of $1970-something that it was at during Christmas 2012.  Silver is also quite a bit down, as well, at $28.48.)  While the Hmong prefer using silver, as the owner of Beadazzler Beads was telling me, they’re expanding their work to brass, given the prices of metal at the moment.  And I am so glad they’re working in brass – it keeps my investment costs much lower, and I don’t have to learn a new technique if I don’t want to.  (I do want to, but not everything needs to be a learning curve.)

Making the clasp was a little less painstaking than I thought it would be.  I used 18 gauge non-tarnish brass wire, the Hill Tribes beads, and the rest of the necklace.  The first thing I started work on was the looped link, as it follows the same technique as the rest of the necklace, making sure that I kept my loops very large.  After this was completed and attached, I started work on the hook.  With the hook, it was better to connect the necklace, thread the bead on, and then shape the remainder of the wire into a hook shape.  The hook also has another loop on it, so that it does not get caught on anything or scrapes skin.  There will be a tutorial on this in the future, so please, look for this.

At any rate, this is done.  Next major project will probably be some illumination based on either the Rabbula Gospels or the Codex Argenteus, unless I get derailed by some other side project.

I belong to the Society for Creative Anachronism, and there, I'm known as Konstantia Kaloethina, an Eastern Roman (Byzantinian) woman of the sixth century from Constantinople. I am proteged to Master Gabriel andvaka Kjotvason. I'm an American. I share Harry Potter's birthdate (July 31st, 1983). I typically score as INTJ (Myers-Briggs), and as a confirmed Five with a Four wing "Iconoclast" (Enneagram) type, with strong scores in Musical, Visual/Spatial, and Intrapersonal on the Multiple Intelligences test.
View all posts by Rachel →
This entry was posted in amethyst, Gallo-Roman, jewellery, jewelry, Roman and tagged bead, beads, calontir, gallo-roman, jewellery, jewelry, roman, SCA, society for creative anachronism. Bookmark the permalink.