Heraldry for the Byzantine Persona

As Principal Herald for Calontir, one of the many things I am excited to do with that role is assisting with names and devices.  It is also one of the more frustrating things for early period personae or cultures that are not known for heraldry.  It’s a bit of a balancing act, between actuality and the more creative parts of the Society for Creative Anachronism. 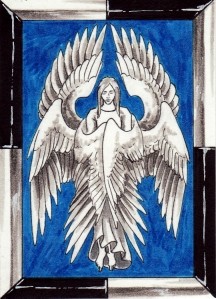 In my persona’s period (6th century Constantinople, around the time of Justinian and after the death of Theodora), the only person who would use heraldry would be the Emperor, and it would often be displayed on a labarum (a specific type of vexillium), or a banner that hung vertically.  This labarum often featured a Chi Rho as part of the standard, while the vexillium would often be the Emperor’s heraldry.

As someone in the SCA, however, I am able to register and use heraldry.  While my persona may not have enjoyed the right to use heraldry, I do and enjoy having it marking things from my modern luggage (seriously!) to a beautiful stained glass piece I received as a gift.  When I first started working on my heraldry, I knew I wanted to key into my persona’s name (a cant, or heraldic joke), show a connection to Byzantine society, and of course, use colours that I actually liked.

So, a friend of mine taught a class on heraldry for non-heraldic cultures, based on The Viking Answer Lady’s article of the same name, which I took at one of my first few events.  While the class was certainly geared for Norse personae, the information was certainly valuable.  One of the points that was made was to get inspiration from the art of the area.  Luckily for me, angels and seraphs are used in Byzantine art from the earliest days of Constantine’s reign, evident in clothing decoration, iconography, frescoes, mosaics, and jewellery.  The seraph, while being a less than period charge, is accepted by the SCA College of Arms as being an acceptable charge for devices.  It was also a cant on Kaloethina, which derives from Kaloethes, or “of good character” in Greek.

I was partial to the blue, the white, and the black (or in heraldry: azure, argent, and sable), as those are all favourite colours of mine.  Blue is used quite a bit in Byzantine art, though not as much as red or gold, so this was an extra bonus.

For those who also portray Byzantine personae in the Society who want to register a device, consider looking at common motifs in Eastern Roman art, such as angels, chalices, the Chi Rho, or even animals like dolphins, lions, or eagles.  And in display, consider using those motifs in your clothing choices (I myself am working on embroidering roundels with seraphim on it for heraldic Byzantine), carrying a vexillium with your device on it, or painting a groundcloth with your device made to look like a mosaic floor.  And I’m interested in what you produce.  If you’ve created something heraldic and made it look appropriate for your persona, I’d like to see it.

I belong to the Society for Creative Anachronism, and there, I'm known as Konstantia Kaloethina, an Eastern Roman (Byzantinian) woman of the sixth century from Constantinople. I am proteged to Master Gabriel andvaka Kjotvason. I'm an American. I share Harry Potter's birthdate (July 31st, 1983). I typically score as INTJ (Myers-Briggs), and as a confirmed Five with a Four wing "Iconoclast" (Enneagram) type, with strong scores in Musical, Visual/Spatial, and Intrapersonal on the Multiple Intelligences test.
View all posts by Rachel →
This entry was posted in herald, heraldry, SCA, Society for Creative Anachronism and tagged byzantine, byzantium, college of arms, college of heralds, herald, heraldry, SCA, seraph, society for creative anachronism. Bookmark the permalink.

6 Responses to Heraldry for the Byzantine Persona