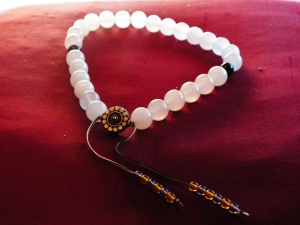 My friend Matsunaga Kagetora (also known as Matsu) is being knighted in a few weeks, and I’ve wanted to make another set of Japanese meditation beads.  The first set of meditation beads was a japa mala I made was for my deputy, Saito Takauji, out of olive wood and strung on silk.  While the olive wood is not period to Japan, Uji is also modernly Jewish, and the beads came from Israel, so it was a gift that hit both SCA and modern life.

But back to Matsu’s beads.

I wanted something that was small, that he could use (should he desire) quietly.  I also wanted to use white (the colour of his new belt) for pacification and purification of the mind.

Buddhist prayer beads have not had the same amount of research done on them, and there are a lot of blocked paths, research-wise.  What I have found is that juzu, shu zhu, japa malas (all different forms, but essentially all Buddhist prayer beads) show a commonality based on Buddhist tenets.

The beads themselves are made of agate, glass, and a metal bead, and strung on silk.

I belong to the Society for Creative Anachronism, and there, I'm known as Konstantia Kaloethina, an Eastern Roman (Byzantinian) woman of the sixth century from Constantinople. I am proteged to Master Gabriel andvaka Kjotvason. I'm an American. I share Harry Potter's birthdate (July 31st, 1983). I typically score as INTJ (Myers-Briggs), and as a confirmed Five with a Four wing "Iconoclast" (Enneagram) type, with strong scores in Musical, Visual/Spatial, and Intrapersonal on the Multiple Intelligences test.
View all posts by Rachel →
This entry was posted in beads, Japanese, largesse, prayer beads and tagged bead, beads, Japanese, prayer beads, SCA, society for creative anachronism. Bookmark the permalink.