Last Saturday, I stepped down from the Kingdom position of Gold Falcon Principal Herald, 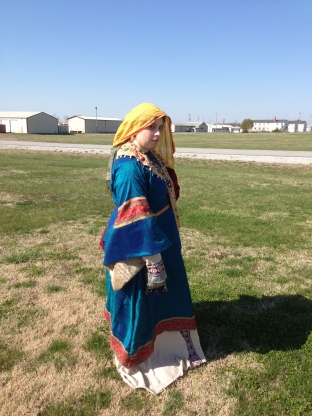 a position I held for two years.  I was given some silk and some other sundry bits of fabric, and wanted my friend Anna to make me something awesome to wear out of it, since I really don’t trust my sewing skills.  We decided that it would be awesome to have something from one of the golden ages of the Empire.  So, eleventh century it was.

I’m really pleased with the silk and how the trim came together.

Now, unbeknownst to me, Anna also had another trick up her sleeve.

During my tenure, I made two Herald Extraordinaries, and being of a scribal nature, I made scrolls for both recipients that were appropriate for their personae.  For Baroness Marie Chantal Delaire, I went for 1450s French manuscript.  For Mistress Sofya la Rus, it was all Ostromir Gospels.  Offhandedly, I apparently really like making super-tiny scrolls.

Anyhow, my successor Takauji got together with my friend Anna and commissioned her to make my Herald Extraordinary scroll, which is based on a 13th c Byzantine icon of the Archangel Gabriel, who is the patron saint of heralds.  You can see her process photos in this entry: Surprise! Icon!

Anna used a 6th century hymn to Mary, the Akathistos Hymn to Mary, as the basis for the scroll text.  It reads as such: 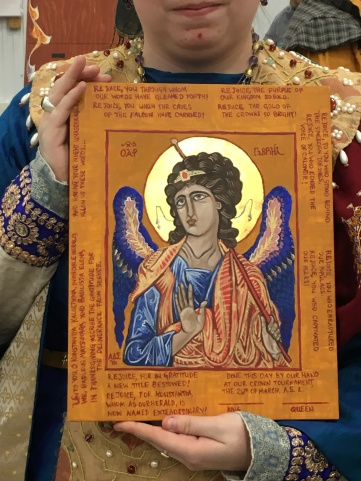 Unto you, O Konstantia Kaloethina, invincible herald,
we, Basileus Matsunaga, and Basilissa Elena,
In thanksgiving ascribe the gratitude for the deliverance from service.
And having your might unassailable, allow us these words:

Rejoice, for in gratitude, a new title bestowed!
Rejoice, for Konstantia, whom as our Herald, is now named as Extraordinary!
Done this day by our hand at our Crown Tournament, the 26th
of March, Anno Societatis Fifty. (L.)

I would be lying if I said that didn’t impress me.  I’m insanely honoured, and just a little verklempt (I might have cried).  And the fact that Anna worked on the icon and my new ensemble (and then some!) and was able to do so without me finding out about it?  Yeah.  My friends are rotting, dirty rotten rotters. . .but without them, I don’t think the awesome of the Society would be the same.  Thank you, both.

I belong to the Society for Creative Anachronism, and there, I'm known as Konstantia Kaloethina, an Eastern Roman (Byzantinian) woman of the sixth century from Constantinople. I am proteged to Master Gabriel andvaka Kjotvason. I'm an American. I share Harry Potter's birthdate (July 31st, 1983). I typically score as INTJ (Myers-Briggs), and as a confirmed Five with a Four wing "Iconoclast" (Enneagram) type, with strong scores in Musical, Visual/Spatial, and Intrapersonal on the Multiple Intelligences test.
View all posts by Rachel →
This entry was posted in Byzantine, calontir, ceremonies, ceremony, herald, heraldry and tagged college of heralds, herald, herald extraordinary, heraldry, heralds, iconography, principal herald, SCA, society for creative anachronism. Bookmark the permalink.