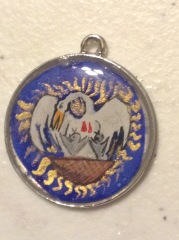 My house has been the Pelican medallion factory as of late.  One of those was presented last week at Master Mathurin’s ceremony.  It’s small, about the size of a quarter, and is inspired by a lot of French manuscripts, especially French Gothic style.  The process that I use isn’t particularly period, as it involves resin, however, the appearance looks like some extremely late period pieces that involve glass cabochons and vellum.  This little guy is about the size of a quarter, and I used gouache (Royal Talens and Holbein pearl gold.)  It went on a cord made out of twisted linen by Master Alan of Darkdale.  I thank both Alan and Mathurin for the indulgence of speaking in the ceremony. 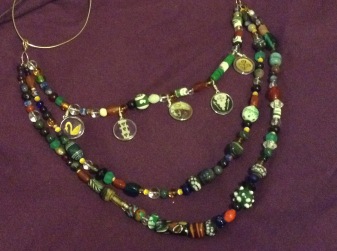 I was also asked to make the medallion for Mistress Svana, and this one I got to play around with.  Svana has a Norse persona, and while the medallions, again, aren’t period (same resin process as Mathurin’s medallion), it was something that I wanted to do for her that would key off her persona.  The large ring was so Their Majesties Calontir could place her medallion on her when presented and then when she went home, she could cut them off and use the bronze loops as a permanent solution.  The beads mostly came out of Svana’s stash, though, I did add a few smaller pieces from my stash (some carnelian, bone, and quartz), as the bigger beads would have overwhelmed the piece.  Learn from my lesson: don’t use 24 ga wire.  Use a wire that has a slightly lower gauge so that the beads don’t wear through.  Thank you, Duchess Susannah, Svana, and Sir Halidor for letting me speak in the ceremony. 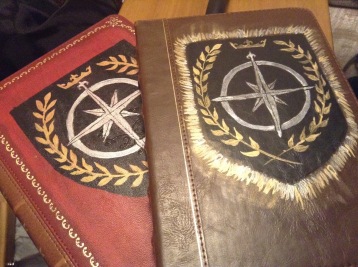 I got to work with Countess Gwen on this project: largesse tablet covers for the kingdom of Northshield to help cover the e-tablets that are used in court.  These are commercially made covers which I’ve stripped down and repainted with leather paint.  Being able to help keep a more period Royal Presence always makes me happy.  (What can I say?  Presentation is everything.) 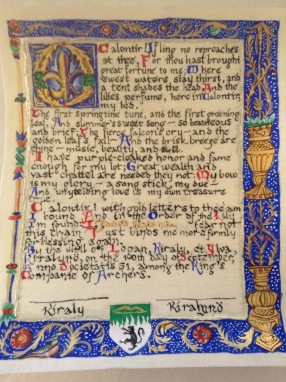 Lastly, this was a Lily (Calontir GoA-arts) scroll assignment I received.  The recipient has a Hungarian persona from the late 1400s, so it was off to find some Magyar pieces from that time period.  Thankfully, the Morgan Library has some pretty trippy ones (I’m pretty sure the 1970s got some ideas from some of these pieces), but there were some nice ones out there.  I fell in love with this one and used it for the scroll.  Being a lefty, I sometimes find that it’s easier to work on smaller scrolls, as there’s less of a chance for something to go awry with calligraphy.  So, this scroll is quarto-sized (~6″x~4″).  This was also my first time working with real gold leaf (my poor wallet), but I love the results.

So, even with all of the issues with being a lefty and calligraphy sometimes being a problem . . . sometimes having moments where forgetting what a letter looks like happens.  These photos were taken before I fixed the error (thankfully, it was the letter L to the letter F, so not as big of a problem), but unfortunately, I didn’t have time to retake the photo.  Ah, well.  I have a problem in that I really do love my stupidly tiny brushes, but I wouldn’t change it for the world!

There you have it.  Secret project round up!

Poetry and Research of Ki no Kotori

The Research and Art of Marion Forester

Not Your Mission Field

Never Enough of Me

The C is For Creative

Finding Your Own Fun in the SCA