It’s been a while.  So much for keeping up with my New Year’s plans.  At any point, gratuitous project pic!

Tagua nut is also known as vegetable ivory, and is carved using a lot of the same methods, and has the benefit of being vegan and sustainable.  This piece isn’t necessarily a period piece, but rather more SCA in focus, however, Byzantine ivories are impressive pieces and I’d like to try my hand at one of these in the future.

I did use my Dremel, though this particular piece isn’t completely done.  I’ll be slicing off the back for more carving, though perhaps with something more simple, like a cross of Calatrava or the like.  I’ve been waiting for saw blades to get in so that I could do the nice fine-grained cutting that a piece like this needs.  Unlike carving copal or amber, it is a much harder substance to carve (I sanded quite a bit off instead of carving with a bit), but it takes ink stain beautifully, and is wonderful to scrimshaw, too.  It does, however, burn very easily, as it is vegetable matter, but I used this to some advantage to create texture and colour for the nest, which is about the colour this turns when it burns. 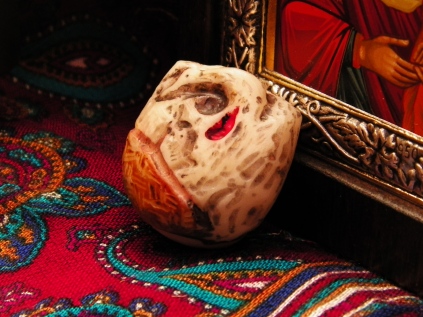 So, while I’m doing some more bits and pieces, I want to keep my brain active towards Byzantium.  My friend Anna is also doing the same on her blog, so check her out, too. Got a question about Byzantium?  Material culture? Religious studies of the period?  Early period Byzantium have you stumped?  Ask me your questions, and it’ll show up in a future post.  (I will, however, not do your homework, so, you’re getting citations on interpretations so you can come to your own conclusions.)

Meanwhile, back to the scriptorium!  I look forward to your questions!

I belong to the Society for Creative Anachronism, and there, I'm known as Konstantia Kaloethina, an Eastern Roman (Byzantinian) woman of the sixth century from Constantinople. I am proteged to Master Gabriel andvaka Kjotvason. I'm an American. I share Harry Potter's birthdate (July 31st, 1983). I typically score as INTJ (Myers-Briggs), and as a confirmed Five with a Four wing "Iconoclast" (Enneagram) type, with strong scores in Musical, Visual/Spatial, and Intrapersonal on the Multiple Intelligences test.
View all posts by Rachel →
This entry was posted in about me, about this blog, brag page, carving, engraving, SCA, service, Society for Creative Anachronism and tagged ask me anything, byzantine, byzantium, carving, ivory, Pelican, project pic, writing. Bookmark the permalink.

4 Responses to Ask Me Anything!