And after you ditch the donut. . . the bling!

My Byzanbestie, Anna of Anna’s New Rome, just made a post about how anachronistic and frankly, terrible, the fabric donut is with Byzantine clothing.  You can read about it here, with this another part of our collaboration.  (TAG TEAM GO!)

Of course, this led down the rabbit hole of what to do to further ornament oneself, especially in the Society, which follows a pretty Anglo-Normative use of regalia (e.g. strawberry leaves for ducal coronets, etc.).  For those of us who are a bit more Eastern in our outlook (I see you, Byzanbabes), I bring you this.

Theodora with her attendants, Ravenna, Italy.

It may be hard to make out, but if you look at the lines right at the start of the forehead, and even with the lady at the end of the line on the right, they’re wearing diadems.  This dates from a late Roman use, presumably by priestesses, moving along to women of high rank as Christianity swept through after Constantine. 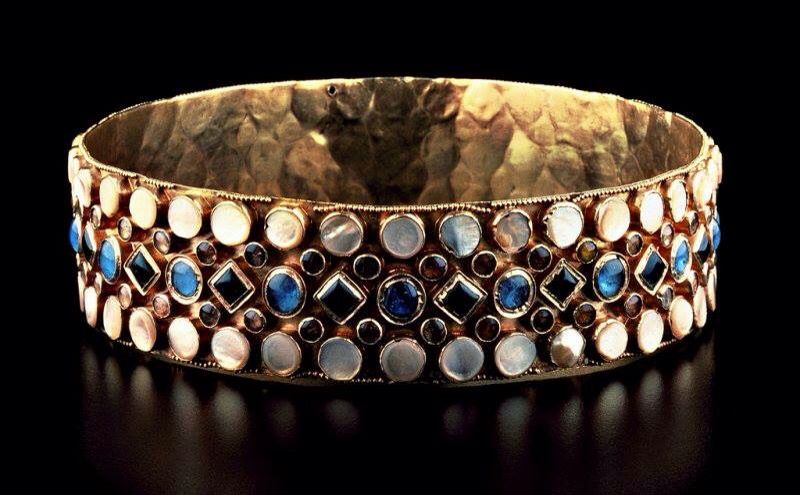 The best part is that we have surviving diadems in this sort of style.  Check out this gorgeous diadem that’s currently at the Walters.  There are a couple of ways to wear this – on a leather strap, much like the above linked Late Roman example, or perhaps even pinned into the turban/fakiolion itself.  Again, the only exception to this appears to be the lady on the end of the line on the right and Theodora on the left.  The lady at the end appears to be wearing a gemmed band, similar to some of the crown of Theodolina, queen of the Lombards in the 7th c.  So, I think what we can extrapolate here is that the cultural exchange that was already in place by the 5th c CE between the Byzantines and the Lombards.  (there’s even protracted sort of conflict, too!  Check out the Byzantine–Lombard Wars.  Downside is that the Lombards ended up with Ravenna.)

The point, here, is that wearing bling over a turban, especially for  (early!) Byzantine use, is period.  Wear it.  Look fabulous.  And keep adding!  (Check this out.  I need a new project like a need another hole in my head, but I’m thinking I need a set of these to replace the pearl pendilla that I have.  I suspect this was suspended from hooks or pins that were attached to the turban or to the diadem itself.)

NB: I am a herald in the Society.  Please, please, please check your local kingdom sumptuary laws before you go putting a coronet/circlet on your head.  I will not be held responsible for the response you may get by wearing something outside of your station.  Otherwise, go bling yourself out.

I belong to the Society for Creative Anachronism, and there, I'm known as Konstantia Kaloethina, an Eastern Roman (Byzantinian) woman of the sixth century from Constantinople. I am proteged to Master Gabriel andvaka Kjotvason. I'm an American. I share Harry Potter's birthdate (July 31st, 1983). I typically score as INTJ (Myers-Briggs), and as a confirmed Five with a Four wing "Iconoclast" (Enneagram) type, with strong scores in Musical, Visual/Spatial, and Intrapersonal on the Multiple Intelligences test.
View all posts by Rachel →
This entry was posted in Byzantine, clothing, hair, herald, heraldry, jewellery, jewelry, ornamentation, persona, persona development, SCA, Society for Creative Anachronism and tagged bling, byzantine, byzantium, clothing, coronet, crown, hair, SCA, society for creative anachronism. Bookmark the permalink.