Let’s play a game!  What happens when you give some heraldic artists a few words describing a heraldic device and ask them to draw it?  Read below to see what happened!

This particular blog post will serve to do some heraldic mythbusting, and to give a peek behind the curtain of the Society College of Arms.  It will also go into a discussion about heraldic art, and why heraldic art can sometimes be a bit, well, squidgy.

A couple of weeks ago, I put out a request of a few heraldic artists, especially those who could do heraldic art from blazon (which is the shorthand that heralds use to describe a heraldic devices).  The blazon I gave them to draw was “<Fieldless>, a seraph proper.”  Society heraldry defines “a seraph proper” as having “Caucasian skin, red hair, multicolored wings.”  I gave no further direction other than to have the artists draw the given design in whatever medium they wanted (digital, traditional, etc.) and to make sure that they followed the Society heraldic default.

I had a few takers (my thanks to Master Bruce Draconarius of Mistholme, Mistress Florlief in Haga, Lord Richard of Dunheved, Lord Mathghamhain Ua Ruadháin, and Lord Ragnar Leifsson for their permission to use their art on this post).  As you can see, I got some really cool, but really different art styles and even colours.  And the best part?  Heraldically, they’re all technically correct (the best kind of correct)!

This is what I submitted!  Not too far off from the other artists!

Also, don’t try submitting this design; I’ve already done that (see right).  (sorry!  I know, it’s a neat idea, but the thought of having a seraph with macaw wings is awfully tempting to a Byzantine!)

Anyhow, so, how can these all be correct?  Why is something completely different stylistically still the correct emblazon?  Is what’s in my kingdom’s armorial really the official art? 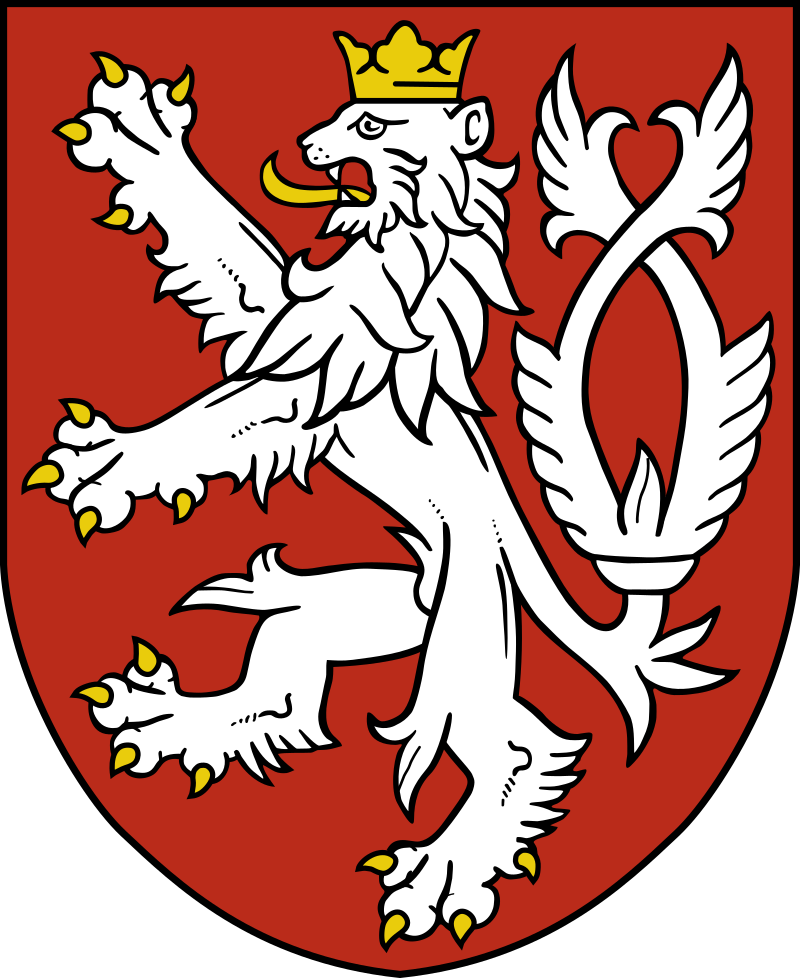 Lesser arms of the Kingdom of Bohemia.

In heraldry, provided that the elements are drawn according to the words of the blazon, it’s a correct emblazon.  Let’s take a look at a period example: the Kingdom of Bohemia.  (Gules, a lion rampant queue forchée argent armed, langued and crowned Or.)  If you’re not familiar with blazon, this translates to “a red background, a white lion with a forked tail facing the viewer’s left, standing on one leg with the other three in the air, wearing a gold/yellow crown.”  Got it in your mind’s eye?  Awesome.  (I’ve given the Wikipedia version of it on the left in the event it’s not coming up in your brain.  This is a modern rendition, so it may look completely different from the next few bits, which are from period texts such as Siebmachers Wappenbuch [1605] and the Zurich Roll [1340]).  They are all valid emblazons based on the blazon provided above.  They are in chronological order, starting with the Zurich Roll.

So, there are some minor differences in the positioning of the legs, and Siebmacher on the right hand side has it facing the wrong way (though, this shows up a lot in rolls of arms within period, where the arms face the middle of the book itself).  Some of the feet aren’t quite off the ground, and in others, it looks like the lion is a champion aerobics instructor.  But, the red background, white lion with the split tail wearing a gold crown are all there, even if they don’t look exactly the same.

That being said, I do want to address the concept of “artistic license,” especially in reference to Society heraldry.  It is one thing to change how a lion might look.  You might change how the tail is curled or how open a wing is.  You can add diapering or shading.  There are a multitude of things that a person can do to really make their heraldry stand out.  If someone has a background with ermine spots, provided there’s more than 5, it’s an ermine background.  Countervair could have more than two “columns” of vair bells and still be correct.

It is a completely different thing, however, to change an item to something completely different.  That is not artistic license: that’s creating a brand new piece of heraldry, and should be discouraged (unless it’s a relative creating a similar piece of heraldry to show a family tie, but that’s neither here nor there).  Painting a standing seraph to look like a Byzantine icon is okay provided it looks like a standing seraph, as is painting in knotwork animals.  Substituting an animal for another, or changing a line of division, well, that isn’t artistic license.

What’s in your kingdom’s armorial is not your officially registered device, which may seem surprising to people.  Remember how I said “artists are gonna art?”  Same goes for the person doing the armorial.  What is official is what someone submitted to the Society College of Arms through your College of Heralds – and the Society Archivist has copies of all of these forms (as should your own College of Heralds).  Anything else is up to heraldic artistic license.  The official blazon (the words, remember) can be found in the Society Ordinary and Armorial.

Onto the mythbusting part of this post – changes to heraldry.  In Society heraldry, we register the emblazon, that is, the picture.  Laurel staff (Wreath Sovereign of Arms) might change a blazon (that is, the words describing the picture) without a submitter’s permission, because the College of Arms wants the best way to describe the picture using heraldic language.  (If the picture submission is changed without your permission, please discuss this with your Principal Herald.)  Sometimes, the College will go through old submissions, and will reblazon (that is, changing the words to describe the picture) based on newer research on what something was called in period, or even to better describe the items on the device.  The picture remains the same.

But, Konstantia, what if I want the tongues on my animal to be an exact colour?  Do you blazon those?

It’s a good question.  Some things in Society heraldry are not explicitly blazoned, even if they’re explicitly so in the emblazon.  Details like tongues, toenails, and yes, pizzles (yes, the genitalia of heraldic animals) are usually considered “unblazonable” – in other words, they are unspecified by the College of Arms.  If you really want them to be a particular colour, work closely with your kingdom’s College of Heralds to make sure that your desired blazon ends up in your kingdom’s armorial, but do be aware that because we don’t typically blazon them because they are pretty small details and with blazon in the Society having a certain economy of language.  (Other places, like the Canadian Heraldic Authority and the English College of Arms may make blazons quite a bit longer.)

So, in wrapping up: heraldic art is much like other forms of art.  Changes to heraldry refer to the blazon to make it easier on heraldic artists, and sometimes the small details are ignored.  Artistic license (to a point) is a good thing!  What’s in your kingdom’s armorial is not officially your emblazon.

I hope this helps when it comes to heraldic art, and I can’t wait to see your own personal twists on your heraldic art!

5 thoughts on “Heraldic Mythbusting – I got the Armorial azures; or, why does my heraldry not match the Armorial?”

Support my work with my Patreon!

Support my work with my Patreon!